Save More When You Bundle IF SO, WE WANT TO GET TO KNOW YOU! PRETTY PERKS FOR EVERY POINT YOU EARN. How to remove rust from kitchen knife Kitchen knives can rust if they are made of steel. Don’t worry, the rust is not dangerous and you can still safely use the knife. The only issue with rusted knives is that it is unsightly and can add impurities to your food preparation. Also, if rust is not treated, it can end up making a knife unusable.

Rust is the common name for a compound called iron oxide — that reddish-orange flaky stuff you see peppered on some metal. This forms when iron and oxygen react to moisture. It doesn’t even have to be water exactly, it could just be the presence of water in the air.

TYPES OF STEELS AND HOW THEY RUST

Steel is divided into two general categories: stainless and carbon.

Only titanium and ceramic knives are 100% rust proof since they do not contain iron.

Why Do Knives Rust?

Here are the ingredients for rust: iron, water, and air.

For those who don’t know, iron is the secret ingredient of the steel found in your knife blades. So when you combine your knife with air and water, you get rust.

HOW TO PREVENT RUSTING ON KNIVES

HOW TO REMOVE RUST FROM KNIVES

There are a few methods you can use to remove rust from knives. They will remove the sight of rust but the rust will never be cured. Basically, you need to use something that is acidic to free the oxidized iron from the rest of the metal.

Take a lemon, slice it in half, and run one side on the rusted metal. If the rust is small, you can remove it with a scrubbing pad. If it is large, you might need to leave the lemon on the spot for 30 minutes before it will start falling off.

You can also soak the knife in white vinegar (apple cider vinegar might leave a stain) for 30 minutes. Afterward, use a scrubbing pad to remove the rust.

Apply the thick paste to a toothbrush and liberally speed it across the blade. You can scrub only with the toothbrush if the rust isn’t too severe or set in.

For extremely rusty blades, you’ll need a little more abrasion to help remove the rust. Steel wool is commonly recommended though it can mess up your blade if you scrub too hard. Another alternative is a slightly abrasive sponge.

Be careful not to scrub too hard because you can scratch the blade or ruin the finish.

Finally, clean off the blade with a piece of cloth to remove the excessive baking powder. If you want to be really good to your blade, you can apply some mineral oil afterward to make sure it’s lubricated and protected from rust in the future.

When you don’t have the materials around the house to get the rust off your knife, there are a few natural methods you can use.

Certain foods also act as a good sources for rust removal. The potato is actually remarkably effective food for removing rust because of its oxalic acid.

Simply stick your knife into the potato for a few hours. After you remove it, wipe the blade with oil and the rust should be gone.

Onions are another food that helps get rid of rust naturally. If you saw back and forth into an onion, the rust will begin to come off by itself.

The sulphonic acids in onions are the key ingredients in getting your blade cleaned. If your knife is beyond the amount of work you’re willing to put into it, it’s OK to move on.

We have thousands of knives in stock that you’re welcome to look at.

ADD ONE OF THESE POPULAR ITEM AND GET 25% OFF! 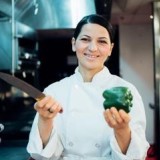 Proud mom, wife, and red seal chef with a passion! Member of WACS, CCFCC, and BC Chefs' Association.

Comments will be approved before showing up. Recipes
This eggplant timbale, a classic Italian dish, is made with pasta, beef, peas, and swiss cheese encapsulated in an eggplant casing. It’s worth every minute of effort.
Read More

Recipes
Duck Breasts are easy to cook and are a delicious way to introduce more poultry into your diet.
Read More